Measuring Force on a Point Mass in Static and Harmonic Analysis

A Point Mass (a remote mass), can be added to an Ansys FEA model to include the load due to mass that does not stiffen a structure, but that is important to capturing inertial loads such as those due to gravity, rotation about an axis, or dynamics.

Ansys Mechanical Workbench supports addition of a point mass that is associated with one or more faces. The point mass will load the associated faces. Face behavior can be set to deformable or rigid. It may be of interest to measure the forces on the point mass. The purpose of this article is to indicate how the forces can be measured in Static and in Harmonic Analysis by including an APDL Commands Object in the Outline.

A Point Mass can be added to a Workbench model, positioned in space, and associated with chosen surfaces. The surface behavior can be set to Rigid or Deformable. When the Deformable choice is made, the Point Mass will move in an average sense with the associated surfaces, and the surfaces can thermally expand and flex without local constraint. The associated surfaces should usually be free of constraints and other loads. 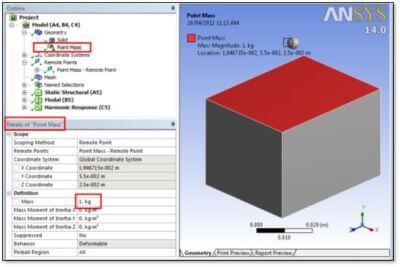 The Point Mass can be promoted to be located at a Remote Point in recent versions of Workbench: 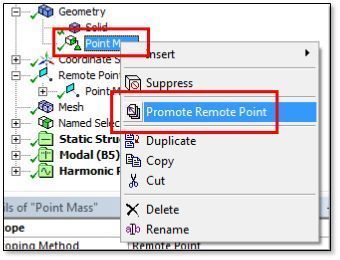 Advantages of having a Remote Point promotion for a Point Mass include identification of the node located at the Point Mass. This can be done with an APDL Commands Object at the Remote Point of interest:

Additionally, It is also possible to find out the Real number for the contact elements associated with the Remote Point. If recorded in a parameter, this could make is possible to identify the contact elements later in other APDL Commands Objects. In the above Figure 4, the node number at the Point Mass (Remote Point) has been recorded as the parameter “mymass”, and will be used later.

In the present example, the surface where forces are to be measured is identified by a Named Selection. It should be the same surface as was used for the Point Mass (and therefore the Remote Point). This Named Selection, called “Face_Selection” in this example, will be used in later Commands Objects. An alternative approach could be to identify the Real number of the Remote Point, as mentioned above, in order to find the contact surface in a later Commands Object.

Static analysis results in forces and moments on the surfaces associated with a Point Mass, as transferred from the Point Mass. In the figure below, contents of a postprocessing Commands Object are illustrated. A result is loaded with the SET command, nodes on the surface of interest are selected with the CMSEL command using the Named Selection (component) for the face, an FSUM command sums forces on the selected nodes, and a *GET command retrieves the force result of interest.

The parameter “my_force” takes on the value of force in the Y direction.  In addition, it is reported as an output parameter in Workbench Mechanical because it starts with the Output Search Prefix “my_”. The Commands Object ends with an ALLSEL command so that other postprocessing work can commence with all entities selected. Notably, other attempts to retrieve force on the Point Mass did not succeed, as illustrated in the figure below for the Remote Point associated with the Point Mass. This absence of a result exists even when an OUTRES,ALL,ALL commands object was included prior to the SOLVE. Harmonic analysis results in real and imaginary numbers in the result, which imply amplitude and phase in the response. We would like to examine the amplitude of the force on the Point Mass. This, too, can be done via an APDL Commands Object. Prior to SOLVE, an OUTRES command was needed to make enough information available for the force to be measured. The Analysis Settings object did not provide enough control to do this.

Once SOLVE has executed, a Postprocessing Commands Object can report the force: The above figure APDL commands object is longer than necessary. It retrieves forces WITHOUT the HRCPLX command, and explores the consequences of changing arguments of the FSUM command.

Use of the HRCPLX command, with the OMEGAT argument set to the phase angle value “360”, should return the amplitude, according to the Commands Manual. This is done without actually knowing the phase angle. The parameters “my_force2a”, “my_force2b”, and “my_force2c” return Workbench Parameters for the amplitude of forces on the Point Mass, as shown here in the figure below. Note in this figure that the Input Argument is the desired frequency “15867”. This frequency was chosen because of the results of a Modal Analysis that preceded the Harmonic Analysis—the frequency is close to a resonant frequency with vertical motion by the top face that is associated with the Point Mass. There are several Results parameters, mostly presented for user information.

In the second figure below, a Frequency Response object is used to find the frequency and phase angle at which a maximum Y movement response is found on the selected face. This is the movement for which the vertical force on the Point Mass has been measured.

Forces on Point Masses can be measured in APDL Commands Objects in both Static and Harmonic Analysis in Ansys Workbench Mechanical. In the case of Harmonic Analysis, it is important to discover the maximum amplitude, as illustrated in the use of the HRCPLX command. Frequency Response plots also give insight into movements in a Harmonic Response analysis.

The following is the text of the APDL Commands Object used in retrieving the Harmonic Analysis Force and other data. The user must supply the ARG1 parameter (the frequency of interest in cycles per second) as an Input in the Details of the object:

What is Static Structural, Harmonic, and Transient Analysis?

Finally, we hope that you can make productive use of Point Force Mass (remote mass), and varying supportive analysis’ for your Ansys Mechanical models.  For more information, or to request engineering expertise for a particular use-case scenario surrounding mass modeling, harmonic or static analysis, please contact us here.