Integration of antennas in complex environments is increasingly common in today’s industry with the mass exodus from wired to wireless technology.

Our customers are commonly interested in understanding how their antennas will perform in the presence of interference from both the platform and neighboring antennas.

Since chamber testing of wireless systems can prove to be costly and hardly possible with large enough platforms, we regularly simulate these systems to assess their performance in the presence of environments that disrupt their radiative behavior.

Common applications include the following: 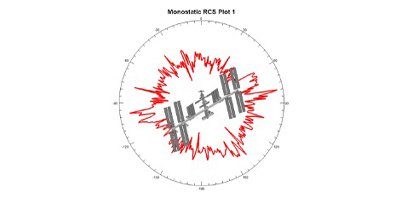 Dramatic advances in wireless and mobile technology have opened up new business prospects. It is now possible to totally change how businesses function and conduct business. Businesses will become more productive, cost-effective, and efficient as a result of this shift. With its vast Internet of Things (IoT), improved mobile experience, and mission-critical connectivity, the next 5G wireless technology is expected to alter a variety of industries. Our wireless professionals are prepared to address these new technological and commercial difficulties and offer creative solutions.

We cater to three major industry sectors, with Enterprise and Vertical Markets being the largest. Since mobile and wireless have a “horizontal” impact on how we live, work, and interact.

Almost every business has started utilizing wireless and mobile technologies to enable its mobile workforce. Solutions for this category typically combine a number of wireless technologies, such as WiFi, RTLS, and RFID, to improve asset visibility in a smart hospital. Equipment and software vendors that produce mobile and wireless goods and solutions for diverse markets make up the second broad group.

The third type consists of service providers, such as cable and wireless operators, who install wireless infrastructure to increase capacity and expand coverage in order to support the mobile era. This covers WiFi access points, DAS networks, and small cells with integrated LTE-WiFi.

On the development of products and solutions for mobile and wireless technologies, SimuTech Group provides consulting services to businesses in a variety of vertical areas. We add value to your company through consulting and effective solutions.

WiFi is an established technology that is always improving, introducing new features including faster speeds, greater ranges, and lower battery usage. These improvements will assist in meeting the rising demand for mobile data.

In comparison to IEEE 802.11n, the new 802.11ac amendment will provide three times the speed, twice the range, and a longer battery life. The aggregate and user throughputs in WLANs should be greatly increased thanks to the new 802.11ac standard. The desired user throughput is 500 Mbps or more, while the desired aggregate throughput is above 1 Gbps. The 2.4 GHz band (802.11b/g/n) and the 5 GHz band (802.11a/n) are used by current 802.11 technology.

While only operating in the 5GHz range, 802.11ac does provide backward compatibility.

This is valid for other 802.11 technologies (802.11a/n) using the same band. 802.11ac relies on a number of advancements in both the PHY and the MAC levels to reach these goal throughputs. These fresh features are part of the PHY improvements:

Many of the advancements that were first made in 802.11n are also included in the Media Access Control (MAC) layer. One noteworthy improvement is the increased aggregate MAC Protocol Data Units (MPDUs) maximum size (1 MB), which leads to greater throughputs due to decreased overhead.

Additionally, 802.11ac will consume less power, have a longer range, and offer faster speeds than earlier generations. It is anticipated that integrated 802.11n/ac radios will be quickly adopted and receive extremely strong industry backing.

In terms of regulatory changes, the FCC’s most recent notice of proposed rulemaking (NPRM) adds 195 MHz to the 5 GHz spectrum for WiFi use. More wideband channels (80/160 MHz) and larger capacity will be possible as a result.

Cellular networks have been under extreme strain as a result of the recent explosion in mobile data consumption, and this trend is anticipated to continue as the demand for mobile data nearly doubles every year.

According to Qualcomm’s “The 1000x Mobile Data Challenge,” this indicates a 1000 fold growth in mobile data consumption within 10 years. Additional network resources, such as more spectrum, higher system spectral efficiency (bps/Hz), and spatial spectrum reuse, are required to meet the growing demand for mobile data.

The result is that in order to meet the anticipated demand for mobile data, future mobile and wireless networks’ capacity density (Mbps/m2) will need to be greatly raised. The key reason why current 3G/4G cellular networks won’t be able to meet this demand is a scarcity of (licensed) spectrum.

Consequently, one of the most promising strategies to ease the capacity bottleneck is to reuse the limited wireless spectrum over tiny areas utilizing small-cell technology. Small-cells will utilize both licensed and unlicensed airwaves and integrate LTE and WiFi technologies.

Most smartphones, tablets, and laptops now come with WiFi, thus for many users it has replaced other connections (when accessible). In the next three years, WiFi access points and network management software are estimated to deliver half of all IP traffic, making them crucial to carriers. The capacity squeeze may be eased with the addition of more than 600 MHz of unlicensed airwaves in the 2.4 and 5 GHz bands. Because of this, WiFi has gained support from several operators as a different radio access technique.

Additionally, this technology will ultimately be incorporated into the operator network as a component of the service offering. However, a number of changes must take place in order to get over some of the drawbacks of present WiFi networking, particularly those related to security and user experience.

The new 802.11ac standard for very high speed networking, Hotspot 2.0 Next Generation Hotspot for a cellular-like experience, WiFi offload, and WiFi-3GPP network integration are a few recent advancements in WiFi networking that are crucial for small-cells and HetNets.

5G mmWave aids in achieving a sizable return on investment

A ground-breaking advancement in cellular technology, 5G mmWave gives users access to the enormous bandwidth and capacity seen in frequency bands over 24 GHz. The wireless ecosystem has now adopted 5G mmWave, which was formerly dismissed by doubters as being unachievable but is now gaining popularity worldwide.

Everyday, the enhanced user experiences and consumer happiness result in substantial monetization potential and new prospects for carriers. Learn from these studies about the financial advantages and affordability of implementing 5G mmWave, which include many nations and deployment scenarios such as dense urban, indoor businesses, and fixed wireless access (FWA).

As a member of a project team for wireless integration consulting, our engineers spend a great deal of time conducting research and development and introducing fresh ideas for gadget designs.

Engineers also concentrate on increasing the effectiveness of current ones. Team duties for wireless integration consulting include creating customized systems that generate the best possible signal strength, speed, security, and network capability as well as debugging existing networks to ensure that they operate at maximum efficiency.

The “Big 4” of Wireless Networks

We will go over the various wireless network kinds, as well as the numerous tools and connections each one needs, in the accordion dropdowns below.

Within a building or in a small outdoor area, internet connection is made possible through wireless LAN (WLAN) technology. WLAN technology was initially utilized in homes and businesses, but is now present in shops and dining establishments.

Due to the COVID-19 pandemic forcing office workers, students, teachers, and others to work and study from home, the use of home networks has significantly expanded.

Most home network layouts are straightforward. A modem connects to a local service provider’s cable or fiber. The signal is received by a wireless router that is connected to the modem and broadcasts it using a wireless protocol, such as the 802.11 standards.

In order to give people access outside of an office or home network, wireless metropolitan area networks have been set up in cities all over the world.

Although these networks have a larger coverage area than networks in offices or homes, the fundamentals are the same. All around the service region, APs can be seen on the exterior of buildings or atop telephone poles.

APs transmit a wireless signal throughout the region while being wired to the internet.

Users connect to the closest AP, which then forwards the connection through its internet connection, to reach their intended destination.

Using protocols like Bluetooth and Zigbee, wireless personal area networks often only cover a very small area—a maximum of 100 meters (~325 feet) for the majority of applications.

Hands-free phone calls, earpiece connections, and signal transmission between smart gadgets are all made possible via Bluetooth.

For instance, an IoT network’s stations are connected through Zigbee. Line of sight applications for infrared technology, such as linking TV remote controls to TVs, are restricted.

Through the development of novel signal transmission techniques, wireless engineers have continuously enhanced technology. Each of these wireless technologies can now provide faster data rates and longer range thanks to these developments.

In order to enable access outside the coverage area of a wireless LAN or metropolitan network, wireless WANs use cellular technology.

These networks allow users to call other people who are connected via a wired or wireless wide area network. Additionally, users can access websites and server-based apps by connecting to the internet.

In the United States, Canada, and the majority of other nations, cell towers can be found almost anywhere.

Whenever a user connects, the connection is forwarded to the closest cell tower, which is then either connected to the wired internet or to another tower that is.

Use accurate and reliable simulation throughout your medical device design process, including physics-based post-processing results to predict product performance, and comply with safety standards.

Modern motors and generators require optimal use of materials to produce the maximum possible torque in the smallest size increments to lower manufacturing costs, and maximize ROI.

Various parameters of the EM base design can be studied to find their effect on the overall performance including sensitivity analysis, tuning augmentation, radiation gain, impedance matching losses, etc.

The ability to simulate proposed geometries and methods of operation on solenoids and linear actuators encourage new ideas, and speeds up progress in reaching optimal design types.

Touch sensors are ubiquitous in modern technology. Understanding the mutual capacitance of your screen with an outside dielectric is crucial in determining when a “touch” is recorded.

Wireless Integration Testing is a crucial component in determining the performance readiness of antennas in the presence of interference from each platform and neighboring antennas.

Many PCB-related problems require alterations via component placement, trace routing, or the plane metallization itself, all of which prove difficult to manage on the bench.

Through simulation, ensure compliance with one (or more) industry and/or military technical standards such as IEC 60601-1 for medical electrical equipment.

Several consideration of the EM base design can be analyzed to determine their influence on the overall performance within a sensitivity analysis, including radiation gain and impedance matching losses.

Determine if an interaction between operating equipment and the supporting structure has a statistical likelihood to create a destructive resonant operating condition resulting in equipment failure.