How to Measure Forces Across Contact Pairs via Harmonic Analysis

When a Harmonic Analysis is performed in Ansys Mechanical Workbench, forces across contact pairs can be measured if a penalty method is used for a contact pair of interest, and a Force Reaction object is placed in the Solution section of the Outline for that contact pair. This article details extraction of contact force in Harmonic Analysis when using a simple model.

In a test model, a Bonded Contact pair was set to Asymmetric Pure Penalty contact. The smaller face was set to the Contact side. Force would be measured at this contact pair in a Harmonic Analysis. 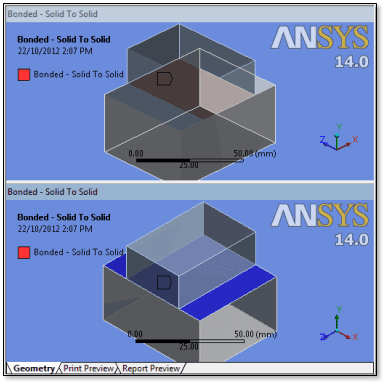 Analysis settings when using Full Harmonic analysis should output “Calculate Reactions” so that reaction forces at supports (constraints) on the model can be measured in the output. In general, this type of data should be examined to complement measurements of forces across contact pairs. In addition, with Full Harmonic analysis, it has been necessary to include an APDL Commands Object in the Harmonic Response environment to obtain nodal force data that is not generated with the “Nodal Forces” and “General Miscellaneous” choices in “Analysis Settings”. The APDL Commands Object can contain a minimum of:

in order to generate data required to track forces across penalty-based contact pairs in Full Harmonic Analysis during postprocessing. The usual settings for a range of frequencies and “Solution Method” “Full” are entered.

With the above settings, a full harmonic analysis generates output data including reaction forces. In the figure above, the real and imaginary components of the force across the contact pair are illustrated. In the Details of “Force Reaction—Contact” the frequency at the peak has been combined with a 90 degree phase angle to inspect a near-peak force amplitude, which is listed in the “Results” section of the Details.

One or more “Frequency Response” objects should also be formed to inspect the results and to see amplitude and phase angle versus frequency plots, to learn more about peak amplitudes and phase angle variation.

A Modal Superposition harmonic analysis does not require the above ADPL commands object, but more Output Controls settings must be set to “Yes”.

The following figure shows settings for Mode Superposition analysis, applied to the above model: As above, a range of frequencies of interest is indicated. Users can make choices about Clustering of results, and Output Controls. Note that “Nodal Forces”, “Calculate Reactions”, and “General Miscellaneous” are all selected in this example of Modal Superposition analysis.

This makes available the same postprocessing as in the Full Harmonic analysis, with the possible advantage that clustering permits a more detailed view of the peak responses than a Full Harmonic computation that does not use a high density of frequencies in the frequency sweep.

As usual, in postprocessing users must choose frequencies to inspect, and manually set phase angles that are appropriate for those chosen frequencies if “Real” amplitudes of the response are to be inspected.

Both Modal Superposition and Full Harmonic analysis can give users information on forces across contact pairs. The contact pairs should be set to an asymmetric penalty method such as Pure Penalty. In Full Harmonic-based equations an APDL Commands Object is needed to generate OUTRES,NLOAD,ALL data in addition to other outputs of interest. In Modal Superposition analysis, the APDL commands object is not needed, but Output Controls are needed to generate Nodal Forces, Calculate Reactions, and General Miscellaneous data for postprocessing.

Users are left with the usual challenges in Harmonic simulations of finding peak real responses and examining “worst case” results for engineering decisions.