With the latest release in Mechanical Workbench, you are now able to perform 2D to 3D submodeling with ease.  This feature will allow the user to compute local detailed results that are not captured using a surface model. The process of 2D-3D submodeling is very similar to 3D-3D. The user would first create a shell model from his original solid model and then perform his analysis.

After obtaining a solution, the user then creates a detailed cutout submodel from the original solid model. Once the submodel is defined, the next step is to connect the solution branch from your shell model analysis to the setup branch on your 3D submodel using the Workbench project page. Ansys will automatically interpolate the results from the shell model onto the user specified cut boundaries. 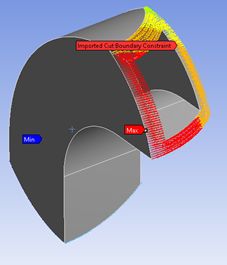 You can even have mixed shell-solid geometry and be able to import the solution displacements to a fully 3D submodel. This new feature can be implemented with relative ease and will be extremely useful for users with large shell models who want to examine an area of their model in greater detail.

One of those “tricks” in stress analysis that was once frequently employed is submodeling. But it wasn’t used very often until lately because it was a hassle to perform in ANSYS Mechanical. Submodeling is now a quick, effective, and precise technique. The goal of this article is to explain the idea to more experienced (old) users and demonstrate how much simpler it is to complete in ANSYS Mechanical compared to Mechanical APDL.

The fundamental concept is to have a rough representation of your entire part or assembly. You disregard minute mesh details that don’t affect the system’s overall reaction.

The method is based on St. Venant’s principle, which states that at sufficiently great distances from load, the difference between the consequences of two different but statically identical loads becomes very minor.

The fundamental concept is to have a rough representation of your entire part or assembly. You disregard mesh details that don’t affect the system’s overall performance; for example, the local stiffness has no bearing on the strain outside of the immediate area. You next create a very detailed model of the area of interest, known as a submodel. To obtain the precise, highly-refined response, the displacement field (and temperature, if there is a temperature gradient) from the coarse model are applied to the submodel as a boundary condition.