Have you ever watched a musician playing music on a hand saw with a violin bow, changing the pitch by flexing the saw blade? The pitch changes because of large-displacement stress stiffening of the blade.  These are the concepts we will review relating to pre-stressed modal analysis linked to nonlinear static analysis.

Ansys Mechanical (Workbench) v14.0 can consider the modal natural frequency of vibration analysis of a pre-stressed structure, even if the pre-stressed state is the result of nonlinear modeling. Nonlinearities can result from any combination of large displacement, nonlinear contact, or material nonlinearity in the analysis.

This article reviews some settings that can be studied by users who want to examine the technique. Note that the resulting modal analysis result can be sensitive to contact settings, mesh density, and other properties of the nonlinear static analysis—sensitivity analysis may be indicated. 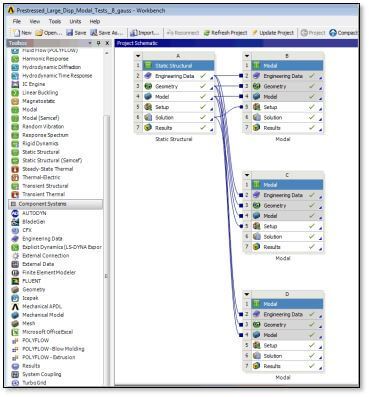 The figure below shows example Analysis Settings for a static nonlinear pre-stress analysis that will send its deformed shape and pre-stress condition to a downstream modal analysis.

In the figure below, the minimum number of substeps is 40, plus the Restart Controls and the Output Controls specify 40 “Equally Spaced Points”. “Equal spacing” of recorded substep results is usually approximate in nonlinear work. Modal analysis can only be performed for the results points that were saved—no interpolations are performed to give approximate results at times for which a solution was not stored. 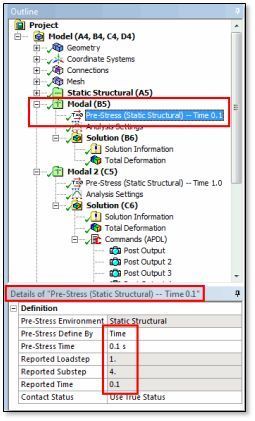 In the figure above, a Modal Analysis system has been chosen in the Outline, and the time at which a pre-stress result will be imported has been established. Note that in the Details setting, the user inputs a “Pre Stress Defined By” time. Alternatives include specification of the last result, or the end of a specific load step. The result closest in time as saved by the preceding Static Structural analysis will be used. The Reported Time that is shown in the Details in a grey box is the actual time that will be used. The Load Step and Substep for that time are also output. In this example the “Pre-Stress Time” happens to match the “Reported Time”; this will not always be the case for substeps.

A different Modal system will be needed for each different “Pre-Stress Define By” time that is to be evaluated.

In the figure below shows a deformed shape calculated in an example nonlinear large-displacement static analysis. A thick fixed plate is above a thinner flexible flat plate. Contact between the plates resulted left of center in this image. This contact has a substantial effect on the natural frequencies of vibration of the lower plate. 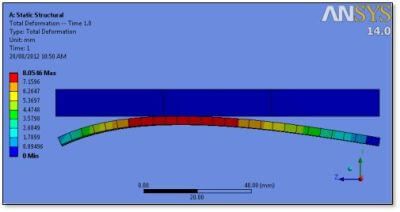 In the figure below we see a listing of the first 6 modes of vibration for the structure. There is a plotting complication—the mesh is positioned in its original location in space, not at the deformed location calculated in the nonlinear Static run. Workbench at v14.0 does not plot mode shapes relative to the nonlinear pre-stressed large displacement shape. Modes calculated are for the deformed pre-stressed structure. To see mode shapes plotted relative to the deformed structure equilibrium position requires some APDL commands. 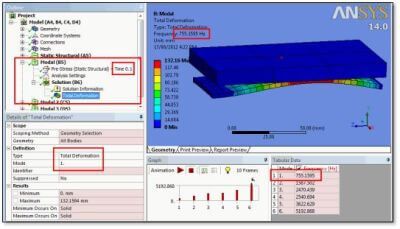 Planning is required for mode shapes to be plotted relative to the deformed structure. The first step is to place a copy of the RST file of the static analysis in an easily accessed location. This is done in the post-processing section of the Static Structural section of the Outline. In the figure below, we see an APDL Commands Object set of commands that copy the “file.rst” results file to a relative location two levels up in the subdirectory hierarchy:

Here is the text of the above APDL Commands Object for saving a copy of the RST file:

The static analysis RST file contains node deflection values for all of the saved substeps in the nonlinear pre-stress Static Structural analysis. As shown in the figure below, a second APDL Commands Object can be placed in the postprocessing section of each pre-stressed modal analysis to use those RST file results to move the nodes in the model to a new location by using the UPCOORD command. The deformed structure’s equilibrium position can then be plotted with an EPLOT command, and the mode shape relative to that equilibrium position can be plotted with commands such as PLDISP or PLNSOL. This does not affect Workbench Mechanical’s usual plots.

The complete APDL Commands object used in the figure above is:

Several Mechanical APDL images are formed by the commands above. Three are shown below, and can be re-programmed by users as needed.

Nonlinearities in the Upstream Static Analysis

In the figure below shows the shape of the lower plate of the example model as imported from the nonlinear static analysis for a chosen load step/substep. This is a pre-stressed shape for which a modal analysis has been performed. The original part was flat—the curved shape resulted from loads and contacts in the static analysis. 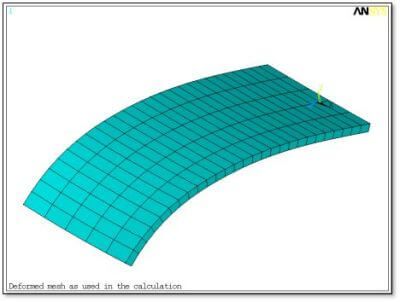 The first mode of vibration relative to the above pre-stressed shape is shown in the figure below. The PLNSOL command employed shows the outline of the non-vibrating shape. 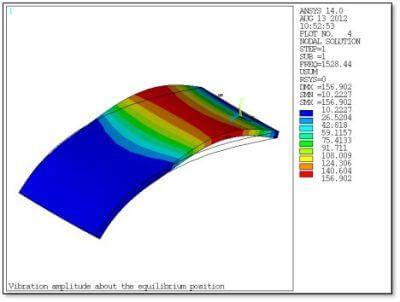 The figure below shows a front view for the same mode of vibration. Note that to the left of the contact region as seen in Figure 5 above, there is relatively little movement by the deformed shape—most of the kinetic energy in the vibration is in the larger region to the right of the contact zone. A plot of contact penetration in the upstream nonlinear static analysis is shown in the figure below. Contact stiffness and mesh density will affect how many elements are calculated to be in contact, which can affect whether the flexible plate in this example will rock in ROTX movement about one contact point on each side of the model, or whether it is somewhat fixed against rocking by a large flat contact patch.

In this example, soft penalty stiffness values will increase the size of the contact zone, but reduce the resistance to rocking about ROTX, so the calculated mode 1 is not highly sensitive to the stiffness setting. In general, this will be model dependent, so users are advised to think carefully about how contact modeling is done. A detail to consider carefully in contact modeling is whether to use frictional or frictionless contact for certain nonlinear contact pairs. If frictional contact is used, even with a vanishingly small coefficient of friction such as 0.001, the modal analysis will linearize the contact region to act as bonded, preventing sliding motion where the contact is closed. If a frictionless setting is employed, the contact region will be linearized as no-separation.

If the modal analysis contains significant contact sliding in the no-separation choice, the result will be affected by this choice of frictional versus frictionless contact. Users may need to evaluate models with each of these contact settings to see whether the contact Type setting is important in the resulting modal analysis.

Other typical considerations in modal analysis will be needed. The nature of assumed boundary conditions can affect a modal analysis, and various assumptions may need to be evaluated with independent models. As usual, a number of modes that is greater than the minimum number required should be evaluated to see whether there are other frequencies that could be of interest. This is particularly true with cyclic symmetry models.

Nonlinearities in the upstream static analysis can include large displacement, contact, and material nonlinearity. The modal analysis is linearized about the deformed state that is imported from the static analysis. The effect of materials that have underdone nonlinear behavior has not been tested in the creation of this document. Users must plan how much information is to be stored during the nonlinear static analysis.  That is, in order for the desired results data to be available in modal analysis or modal systems.

Both Restart Controls and Output Controls must be set to make data available for desired “times” in the static analysis. In the “Pre-Stress” settings for the modal analysis, a choice of available load steps or times can be made by the user. A different modal system will be required in the outline for each result in the static analysis that is to be used for modal analysis.

A brief discussion of assumptions about contact settings warns users that these contact assumptions can affect results. A choice of frictionless versus frictional contact can significantly affect results in some models because they are linearized to no-separation versus bonded contact, respectively, during the modal system analysis. Mesh density and contact stiffness assumption can also affect some models, and sensitivity analysis (varying settings to see consequent results) is advised in general.

Finally, we hope that you can make productive use of Pre-Stressed Modal Analysis, and varying supportive analysis’ for your Ansys Mechanical models.  For more information, or to request engineering expertise for a particular use-case scenario surrounding modal analysis techniques, please follow the accompanied link.